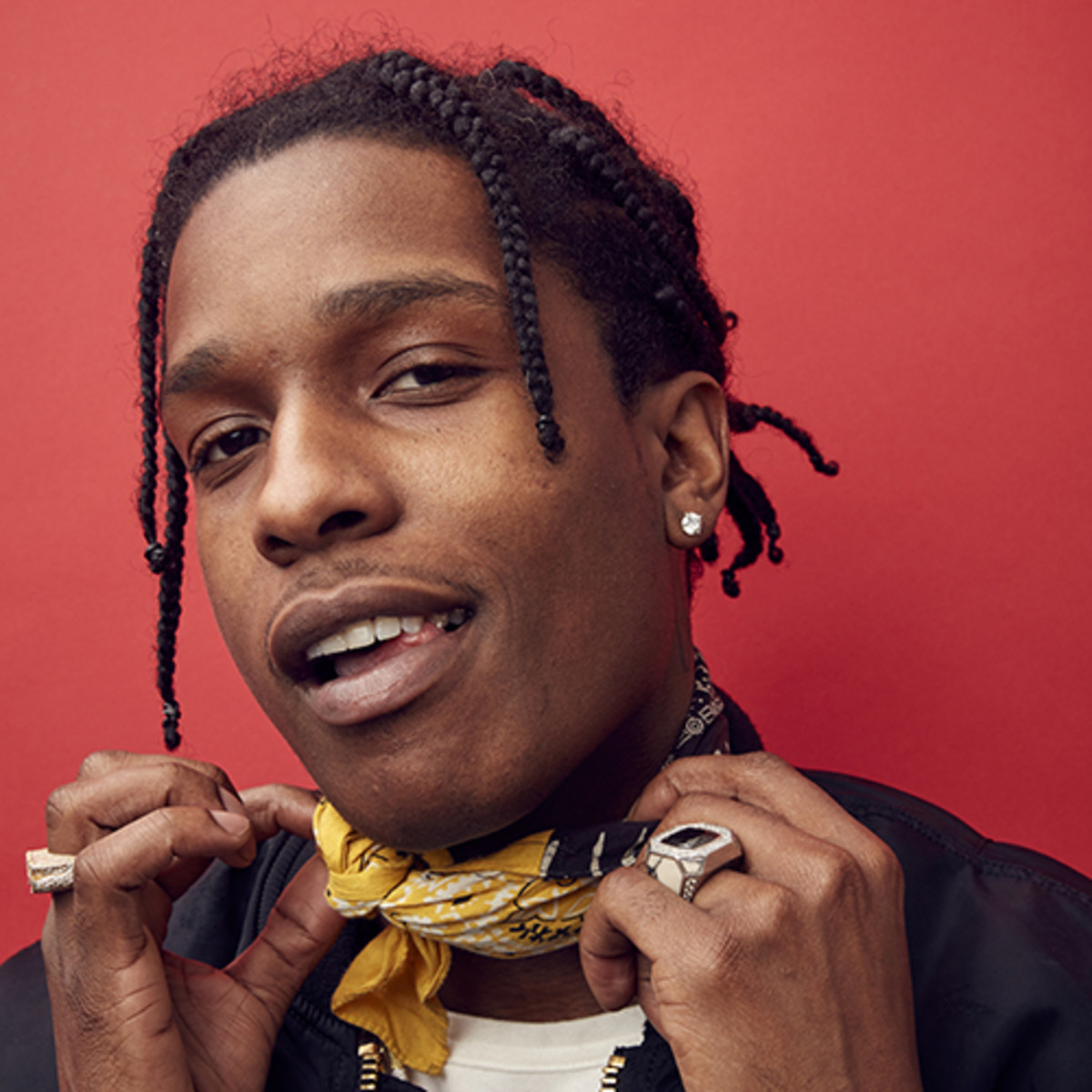 ASAP (or A$AP) Rocky is an American rapper who burst on the music scene in 2011 and soon after released his chart-topping albums ‘Long.Live.A$AP’ and ‘At.Long.Last.A$AP.’

Who Is ASAP Rocky?

One of hip hop’s true mavericks, ASAP Rocky is renowned for his experimental approach to music, his flair for fashion, his penchant for psychedelic drugs and his prolific love life (former girlfriends include Kendall Jenner and Iggy Azalea). The most successful member of Harlem’s A$AP Mob collective of MCs, producers, video directors and designers, Rocky burst onto the scene in 2011, earning an eye-catching $3 million dollar deal with Sony/RCA. He fast became the toast of East Coast hip hop and has never looked back.

A former street hustler whose father was jailed for drug dealing and whose older brother was murdered, Rocky has increasingly revealed an artistic, eccentric, dandified side of his character as he has gravitated away from Harlem towards downtown Manhattan’s creative milieu. Now a front-row fixture in the fashion world, he has collaborated with the designers Raf Simons and Jonathan Anderson, and in 2016 became the face of Dior Homme — the first person of color to represent the luxury menswear brand.

There is more than a whiff of debauched 1970s rock star about him — which may explain his surprise collaboration in 2015 with Rod Stewart, whom he described as “like seeing yourself 40 years older and white”. “You got two types of rappers,” Rocky told Billboard in 2015. “The celebrity and the artist. I’m famous, I’m popular — I’m just not a celebrity. I’m an artist. In my sixties, I don’t want to be just remembered as that kid from back in the day that had cool sh*t.”

What Does ASAP Rocky Mean?

The A$AP moniker stands for different things: Always Strive And Prosper; Assassinating Snitches and Police; and even Acronym Symbolizing Any Purpose.

How Much Is ASAP Rocky’s Net Worth?

At the age of 19 in 2007, Rocky hooked up with the A$AP Mob, a sprawling collective of rappers, producers and video directors co-founded by the impresario A$AP Yams, Harlem’s answer to Malcolm McLaren. That’s when Rakim Mayers acquired the name A$AP Rocky.

Rocky worked with three of A$AP Mob’s producers in particular to develop the spacey soundscapes underpinning his raps: Clams Casino, A$AP Ty Beats and SpaceGhostPurpp. He self-released two singles, “Peso” (on which he dropped the names of fashion designers like Rick Owens and Raf Simons, a future collaborator) and “Purple Swag,” in 2011, sparking a major-label bidding war that began even before he had released his first mixtape, Live.Love.A$AP. That same year, he signed to the Sony/RCA subdivision of Polo Grounds Music for $3 million. It was a combined deal incorporating his solo projects and those of his collective, on their record label A$AP Worldwide. The split was reportedly $1.7 million for Rocky, $1.3 million for A$AP Worldwide.

Although 2013 was a vintage year for Rocky, his successes were bittersweet because his father had passed away in December 2012 (“See my Daddy in heaven, he be da realist G,” he tweeted). Rocky told Vice that his father had been a big influence on him fashion-wise. “He was a clean-cut kind of guy… He told me to always be yourself and always feel comfortable with whatever decision you make because you chose to do it. Just because something doesn’t fit doesn’t mean it’s not right.”

Rocky’s second album saw a change of direction. At.Long.Last.A$AP was released on May 26, 2015. Co-produced by the eclectic Grammy-winning super-producer Danger Mouse, who has worked with everyone from Norah Jones to the Black Keys, it featured guest appearances from Kanye West, Future, MIA, Mark Ronson and — unexpectedly, triumphantly — the veteran rocker Rod Stewart on the single “Everyday.” The album also featured a singer, Joe Fox, who was homeless when he approached Rocky on the streets of London and tried to sell him a CD. Instead, Rocky asked Fox to sing for him and was so impressed he immediately invited him into a studio to record (Fox ended up featuring on five songs).

Musically, At.Long.Last.A$AP sounds much trippier than Rocky’s previous outing; its psychedelic influence made manifest on the single “LSD.” In interviews Rocky spoke candidly about his use of the hallucinogenic drug: “It helps me cope with life,” he told Billboard. “I’ve been doing this stuff since I got into the industry. People are scared to talk about it.”

But as with his debut album, Rocky’s year was scarred by loss. His creative partner, friend and mentor, A$AP Yams (Steven Rodriguez) died at age 26 from an overdose in January 2015. Yams had described Rocky as the Luke Skywalker to his Yoda. His passing made Rocky take stock of his life and career, according to an interview he gave to the UK’s Guardian newspaper in July 2015. “It was always good to have that second opinion,” Rocky said. “To have my best friend there agreeing with me, let me know I wasn’t crazy.” Two months after Yams died, Rocky acknowledged to The New York Times that his friend had “always had a struggle with drugs,” but also that his death may have been caused by sleep apnea: “There would be times that I would catch Yams choking on his own tongue,” he said.

Three years after the release of his previous studio album, ASAP Rocky followed in May 2018 with the long-awaited Testing. Featuring such collaborators as Kid Cudi, French Montana, Kodak Black and Frank Ocean, the album drew mixed reviews, with some critics questioning the cohesiveness of the music and ideas put forth, though most credited the rapper for his attempts at experimentation.

When Was ASAP Rocky Born?

Born in Harlem to Barbadian parents, Rakim Mayers was named after his mom’s hip-hop hero, from Eric B & Rakim. One of his two sisters is named Erika B. He started rapping at eight years old, but only became serious about his craft a decade later. Although a native New Yorker, Rocky was a fan of Southern hip hop when he was growing up, which explains the pronounced drawl in his rapping style. When Rocky was 12, his father was jailed for drug dealing. A year later, his 20-year-old brother, Ricky, was shot dead by a rival dealer. Rocky was 13 at the time, and on his way to school when his mum rushed over to tell him the tragic news.

Despite his brother’s fate, the lure of the streets proved too powerful to resist for teenage Rocky, who started selling weed before gravitating to crack. But he was “never no big-time hustler”, he told the journalist Dorian Lynskey in 2015, making just enough to “support my studio time” but quitting dealing before getting sucked too far in. “That lifestyle’s wack,” Rocky said. “I don’t trouble the law no more.”

With his father in jail and his brother passed away, Rocky, his mom and two sisters spent time living in shelters. They moved around frequently: Harlem, the Bronx, Philadelphia and North Carolina. He saw “a lot of crazy shit” growing up, he told the Red Bull Academy in 2015. When he was 13 and living in east Harlem, older boys would knock passing delivery men off their bikes to “test their strength.” “I was a kid, so I’m like, ‘That’s how a man tests his strength?’” he said. “True story.”

By 2015, Rocky was riding high on his success, with an apartment in Manhattan’s swanky Soho neighborhood and a house in Hollywood. By June, he had made his acting debut in director Rick Famuyiwa’s coming-of-age movie Dope — playing a small-time drug dealer, a role he had long since outgrown in real life. “I think all of us are that kind of guy — all of us rappers, to a certain extent” he told Billboard. “I never want to be that guy. That dude’s corny. He can’t even dress!”

This is not a criticism that could be easily leveled at Rocky. Although he has insisted he does not want to become a fashion designer, he has nonetheless embarked on a number of high-profile collaborations. “Rocky has a very specific aesthetic,” the designer Jonathan Anderson, with whom the rapper collaborated on a menswear capsule collection in 2016, told Complex magazine. “Ultimately, his style is more than just what he wears. It’s the way he carries himself, it’s his interests… It’s all about how you put your own personal twist on things.”

Rocky’s passion for fashion was there for all to hear on At.Long.Last.A$AP, over the course of which he name-checked more than 20 brand names, including Hermès, Prada and Saint Laurent. This is something he has done from the get-go, and it has paid dividends. Having dropped the names of designers Rick Owens and Raf Simons into the lyrics of his breakthrough single, “Peso,” back in 2011, he went on to become friends with both. The following year A$AP Mob teamed up with the West Coast label Black Scale on a capsule collection of T-shirts and sweaters; while Rocky partnered with the designer Jeremy Scott on an all-black pair of Adidas Wings trainers. In 2016 he was announced as the face of Dior Homme; in 2017 he collaborated with Guess Jeans.

By 2017 he was a front-row regular at fashion shows by Calvin Klein (New York), Gucci (London, Milan), Saint Laurent, and Dior (Paris). His year-long relationship with Kendall Jenner was made public on the night of fashion’s biggest fixture, the Met Gala, on May 1. The couple were pictured together on the social-media feeds of Jenner’s sister Kylie, and half-sister Kim Kardashian, flouting the event’s selfie ban.

ASAP Rocky was arrested in Stockholm, Sweden, in early July 2019, after a video clip surfaced of the rapper and his entourage fighting two men in the street. Rocky posted additional footage to Instagram, which showed his crew repeatedly asking the two men to stop following them. Despite his claims of self-defense — and an attempted intervention by President Donald Trump — Rocky was deemed a flight risk and confined to a detention center until he could stand trial for assault.

In August, Rocky was found guilty of assault and ordered to pay damages to one of the victims. He was also given a suspended sentence that capped his jail time at the month already spent behind bars.